Services
About Me
FAQ 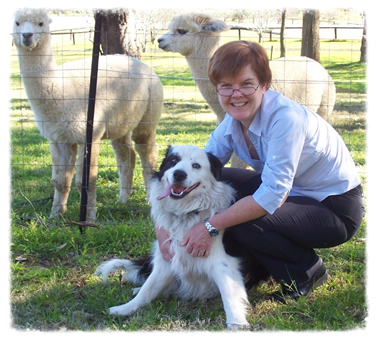 The boys attended the local country school, became soccer mad and got to meet the resident badgers.She continued to work part-time until 2002, where the idea of a home mobile service evolved. Since then, as her business has become well known in the Hawkesbury area, her client base has grown rapidly. She enjoys giving each of her animal clients individual and personal service, and has a genuine caring and friendly nature with them all.  She really enjoys travelling through the different areas in the beautiful Hawkesbury with her business and is constantly amazed by discovering  exquisite places she didn’t know existed before!

Her other interests include travel, bush-walking, band-managing, wine-tasting and listening to her musical sons perform! Shawna is fully registered with the Board of Veterinary Surgeons of NSW, and has full insurance for her mobile business.

Shawna graduated from the University of Sydney faculty of Veterinary Science in 1982, after growing up in suburban Sydney with a varying menagerie of animals and always having a great love and fascination for anything with feathers, fur or fins!

After working full time and then part time with three Sydney small animal clinics, including a stint as managing vet for the RSPCA at Yagoona, she moved out to a 5 acre property in the Hawkesbury in the late 80’s with her husband Richard, her horse, 2 dogs, 1 cat, 4 chooks, a galah and 2 cockateils....and any other abandoned orphans from workplaces!

Since then her “human” menagerie grew to include 3 sons and in 1997, Shawna and her family moved to live in a country farm cottage in Kent in UK for a year, where she undertook locum work in local small animal practices, after gaining her registration with the Royal College of  Veterinary Surgeons.